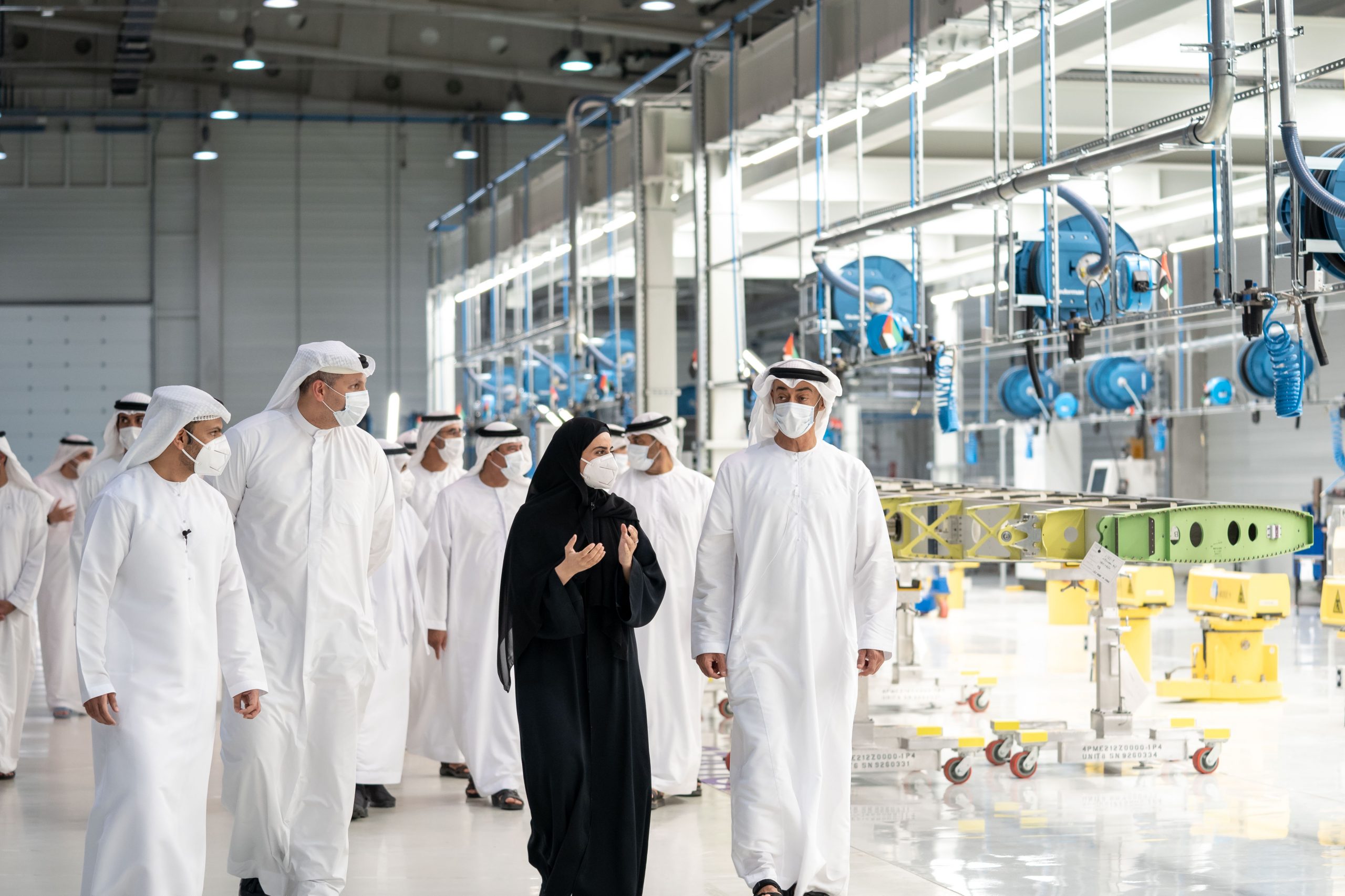 Visiting Strata Manufacturing, the composite aero structures manufacturing facility based in the Nibras Al Ain Aerospace Park, His Highness reinforced that the company is an essential component of the UAE’s aviation and manufacturing strategy.

During the visit he noted that Strata’s continued efforts to support the nation’s fight against the COVID-19 pandemic, alongside other UAE companies and institutions, confirms the country’s ability to continue implementing its ambitious strategy even when faced with today’s current challenges.

His Highness toured Strata’s facilities, where he was briefed on the company’s products, including the aircraft structures manufactured at the plant for major international aircraft manufacturers such as Boeing and Airbus. His Highness also heard about the various technologies and innovations incorporated into the company’s production methods, in line with trends associated with the Fourth Industrial Revolution, as well as the recent addition of the N95 respirator production line at the facility.

The tour began with an address on Strata’s progress since its establishment in 2009, including the establishment of the industrial facilities, production of aerostructures and the new expansion project known as “Strata Plus”, launched in July last year to cater for the Boeing 787 Dreamliner vertical fins work package.

Sheikh Mohammed was also briefed on the various aerostructures that Strata supplies to major global aircraft manufacturers, in line with world class industrial capabilities, including the production of the glass fiber Airbus A330 flap track fairings, the carbon fiber Airbus A350 flap support fairings and the Airbus A380 flap track farings which are the largest aircraft fairings in the world.

In addition, His Highness was briefed on other products manufactured at Strata, such as the Airbus A330 spoiler, which is used aerodynamically to help reduce the plane’s speed, as well as the Airbus A330 ailerons, which support the aircrafts rolling capabilities. His Highness was also briefed on the Airbus A350-900 inboard flaps, which enable the aircraft to secure greater lift during the most critical part of take-off and landing. During the tour, the Pilatus PC-24 business jet belly fairing was presented, this component covers gaps and spaces between parts of an aircraft to reduce drag.

Also showcased during the tour was Strata’s latest addition, the vertical fin assembly line for the Boeing 787 Dreamliner, the largest and most advanced part manufactured in Strata.

The visit also included a presentation for His Highness on the new technologies being developed at Strata along the various innovations deployed within the company. This included the automated drilling robot which is used in assembling complex structures for the A350-900 inboard flaps. A similar robot was also developed by Strata and Boeing and used for the very first time at Strata’s facilities. In addition, His Highness was briefed on an innovative mobile robot used for quality assurance and production supervision; this technology has been particularly advantageous during the current pandemic when staffing levels had to be reduced.

Also presented during the tour was the architectural model of the Strata Solvay Advanced Materials Factory in Al Ain. This joint venture with Solvay, the Belgian specialised manufacturer of compound materials and chemicals, represents a major milestone in Strata’s efforts to diversify its product base and also makes Strata the first supplier of aerospace grade composite materials in the MENA region, and the fourth supplier globally.

His Highness also met the team behind the N95 respirator production line at Strata, which the company launched in cooperation with Honeywell, as part of Mubadala’s efforts to limit the spread of the COVID-19 pandemic locally. The new production line, which began manufacturing respirator with an annual production capacity of over 30 million, is the first production line for N95 respirators in the Arabian Gulf region and aims to meet the increased global demand for personal protection equipment, PPE.

In addition, His Highness reviewed the range of other PPE products that Strata has embarked on to reduce the spread of the pandemic, including a daily PPE kit that includes gloves, a respirator and sanitizing wipes that can be used by airlines, hospitals and international aid bodies for their workers and those they provide services to.

His Highness pointed out that the UAE aerospace industry has developed significantly and has become one of the engines of economic growth and diversification in the UAE. Strata is at the heart of this industry, and its partnerships with major international companies in the aerospace sector underscores the great confidence that is entrusted in the company by global industry leaders. Strata is also contributing to the localization of technology that enhances economic development and growth in the UAE; benefiting from knowledge transfer, particularly in relation to advanced manufacturing. His Highness referred to this achievement as a matter of national pride which is the result of perseverance, planning and hard work.

His Highness concluded his visit by looking at the advanced equipment used in Strata’s state-of-the-art Contamination Controlled Area, Clean Room, in addition to the first sports bicycle manufactured in the UAE using composite materials, in cooperation with Khalifa University of Science and Technology.

The Crown Prince of Abu Dhabi said: “I am delighted to meet you and get acquainted with the progress of your work in this company, which is a source of pride for every Emirati and one that I personally value. I am happy to see our talented Emiratis working efficiently in this advanced industry, including many Emirati women who have contributed greatly to this company.”

“National competence and global capabilities are the main pillars on which our country’s development and progress march forward in the present and future. I am particularly proud of the Emirati women and their role in this distinguished company. With Emirati women accounting for more than 80 percent of the workforce at Strata, this is a source of great pride and confirms their aspiration to work in all sectors without exception. Today’s tour reinforces my confidence in UAE national talent and their ability to lead the future of aerospace. I wish the Strata team all the best in their work, projects and plans.”

Khaldoon Khalifa Al Mubarak, Group CEO and Managing Director of Mubadala Investment Company, said: “Strata’s place as a tier-one supplier to the world’s leading aerospace companies is due to its talent and expertise, both Emirati and expatriate. Its ambitious workforce, strong partnerships, and an institutional commitment to excellence make Strata unique.

“Strata’s agility in establishing an N95 respirator production line as part of the UAE’s COVID-19 response – and in turn, making the nation a net exporter of PPE – is a point of national pride.”