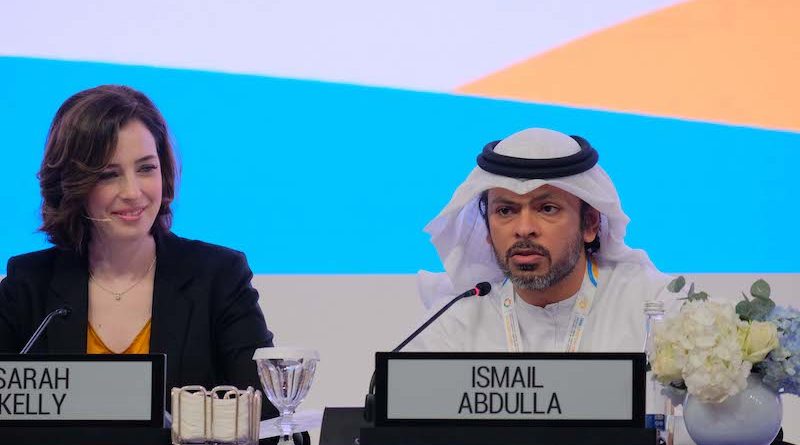 As part of the UAE’s contribution as the host country of the upcoming UNIDO General Conference, Strata highlights the vital role of women in the manufacturing sector

Abu Dhabi, United Arab Emirates, 20 October 2019 – The United Nations Industrial Development Organization (UNIDO) and Ministry of Energy and Industry, United Arab Emirates today announced that Strata Manufacturing, the advanced composite aero-structures manufacturing company wholly owned by Mubadala Investment Company PJSC, will sponsor the ‘Gender Hub’, as part of the United Arab Emirates’ (UAE) showcase at the joint UAE-UNIDO Exhibition that will take place during the eighteenth Session of the United Nations Industrial Development Organization’s (UNIDO) General Conference (GC), from 3 to 7 November 2019 at the Emirates Palace in Abu Dhabi. Taking the lead of the country’s contribution as the host country, Strata will highlight the vital role of women are playing in the manufacturing sector.

The “Gender Hub” marks a significant contribution to Gender, one of the conference’s key focus areas. The hub will see delegates discuss potential pathways in the creation of new legal frameworks regarding gender equality in the workplace, and the eradication of biased practices targeted at women, both crucial elements in ending gender-based discrimination that is prevalent in many countries around the world. Strata will drive focused discussions around the importance of equality in the industry while showcasing how women are driving manufacturing of composite aircrafts parts in the organization and sharing best practices on how women are leading the aerospace sector.

The United Arab Emirates has become a global example of gender equality. At present, 23,000 Emirati businesswomen run projects worth over AED50 billion and occupy 15% of the positions on the boards of chambers of commerce and industry nationwide. In 2015, the ‘Gender Balance Council’ was established, to give women equal opportunities in the public sector whilst supporting the UAE’s global efforts in advocating for ‘gender markers’ and other measures to promote the involvement of women and girls in the UN system. In addition, a ‘Gender Inequality Index for Government Sector’ for the UAE was initiated, alongside a framework to consolidate the efforts of various government entities in a bid to boost the country’s efforts to evolve and enhance women’s role as key partners in building the future of the nation. As a result,  according to the World Economic Forum’s Global Gender Gap Report 2017, the UAE ranked second among Arab countries for gender parity, coming first in literacy and second for wage equality for similar work.

UNIDO is delighted to have Strata Manufacturing come on board as part of the UAE showcase and deliver on one of the key themes of the conference, which is vital for a global future that empowers women to participate in the global economy.

Strata Manufacturing, one of the leading companies in the UAE, is a strong supporter of gender equality and inclusivity and has long since driven and participated in programmes and initiatives that empower the youth to enroll in STEM education. In March, Strata Manufacturing joined the nationwide outreach programme to further empower UAE youth contributing to ‘Think Science’ and the ‘Tawteen 360 Student Forum’, both championing the efforts to equally include both male and female students. The company also established the ‘Composite Aerostructures Training Program’, a program that equips students with the necessary skills to manufacture aircraft parts made out of composites, contributing to Strata’s vision of becoming a global aerostructures manufacturer, meeting the objectives of Abu Dhabi Economic Vision 2030 to create a diversified and a knowledge-based economy. By 2018, the programme has graduated more than 300 Emirati students. As a result of a committed Emiratisation drive, UAE nationals account for more than half of the Strata Manufacturing workforce, of which 86% are women. Strata is also a strategic partner to Mubadala’s “Train for Work” and “Muthabra” program, which aims to develop and train the skills of Emirati.

Ismail Ali Abdulla, CEO of Strata Manufacturing, said: “An inclusive and skilled workforce has long been a strategic priority that has led to Strata’s growth and success in the aerospace industry. Strata strongly believes in the power of talent, irrespective of gender, and thus we continue to onboard colleagues based on skills and abilities who share our passion for manufacturing. To harness the full potential of future industrial practices, targeted gender-responsive actions, policies and investments are essential. We are therefore delighted to be able to host a space dedicated to ensuring an inclusive industrial future that redresses the gender divide and contributes to global prosperity.”

The UAE has enjoyed strong ties with the United Nations since becoming a member on 9 December 1971, just days after declaring independence under the leadership of its founding father, His Highness Sheikh Zayed bin Sultan al Nahyan. Ever since, the UAE has been fully committed to supporting the UN’s agenda of spreading peace and prosperity around the world, respect for international laws and norms, and promoting sustainable development at a global level.

Held under the theme of ‘Industry 2030 – Innovate. Connect. Transform our Future’, the eighteenth Session of the UNIDO General Conference will be held in Abu Dhabi for five days of conversations around the future of global manufacturing.

The UNIDO General Conference is the supreme policymaking organ that convenes every two years to determine the guidelines and policies of the Organization and approve its budget and working programmes. Since becoming a specialized agency, the UNIDO General Conference was hosted away from its Vienna Headquarters only three times: in Bangkok, Thailand (1987); in Yaoundé, Cameroon (1993); in Lima, Peru (2013); and now in Abu Dhabi, United Arab Emirates (2019). Hundreds of participants will gather for the event, including Heads of State, Ministers, senior representatives of other United Nations’ organizations, and prominent leaders from the private sector, civil society and academia.